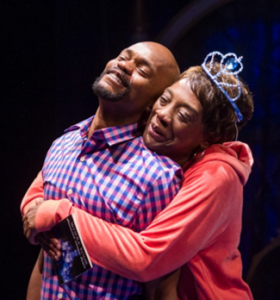 Actor Forrest McClendon would be the first person to tell you he’s blessed. A chance call from a casting director led him to a leading role in The Scottsboro Boys, a musical by Kander and Ebb helmed by Susan Stroman. The success of that show is now part of history, and also part of his story – the transfer to Broadway, the Tony nomination, the regional theater productions, the London premiere at the Young Vic, and now, a West End opening scheduled for this fall. In between his Scottboro forays, Forrest has flexed his artistic muscles pursuing his twin passions: Shakespeare (Othello, Brutus) and new works (currently, Colman Domingo’s Wild With Happy at Baltimore’s Center Stage, photo right). Add to that the fact that he was just chosen as one of ten Lunt-Fontanne Fellows for 2014, a program that recognizes “the most accomplished regional-theater actors in the country,” and you’ll understand why I say the man is blessed.

I’ve been blessed to know Forrest for many years, and was lucky enough to convince him to come to Philadelphia to join the musical theater faculty at the University of the Arts twenty years ago. The man is unquestionably a compelling educator, and considers the work he does teaching and mentoring young artists to be as important as the work he does onstage; for him, these twin endeavors are two sides of the same coin. In honor of his recent honors, I decided to offer these two top tips from Forrest’s playbook:

Making choices is the heart of the actor’s work, and no one embraces this notion more fervently than Forrest. “Always Be Choosing” is the ABC of the SAVI System, but Forrest takes this idea as far as possible – to XYZ, that is. He uses an A-Z worksheet to develop choices for every character he plays; in a play where he portrays multiple roles, as he does so brilliantly in The Scottsboro Boys, every character gets the A-Z treatment. Among my favorites on the list are F (“family”), K (“keepsake”) and T (“theme song”). Z is for the character’s Zodiac sign, and X, provocatively enough, is for “xxx,” the element of sexuality and violence in the character. Forrest’s work on choice-making builds on the foundation of Stanislasvki’s “fundamental questions” and the idea that developing a rich and complex character is both a forensic and a creative process.

Here’s a video clip from the fall of 2010 in which Forrest recounts his first encounter with composer John Kander, and Kander’s advice to him about singing a song.

“Above all,” admonished Kander, “put over this lyric!”

The phrase “put over [a] lyric” has a particular meaning in singer’s parlance; it means to sing, act and enunciate the text in a way that makes its meaning apparent for the listener. When the lyric has been successfully “put over,” it is sometimes said to have “landed,” in the way that a rock landing on your head or a spaceship landing in your back yard is impossible not to notice. Conversely, a flaw in the song or the performance can cause a lyric “not to land,” that is, to remain hard to understand when delivered in performance. Getting every moment in a song to “land” requires a deft collaboration between writer, composer, director and performer.

Whether “putting over” a song like “That’s Not The Way We Do Things” from The Scottsboro Boys or one of Othello’s monologues from Shakespeare, Forrest uses a combination of robust diction and vivid choice-making to make a lyric “land.”

In the SAVI Lexicon, I refer to this quality as “traction.” Forrest and I understand that a dramatic text has to move the listener from point A to point B, to move them to a place of greater understanding and greater empathy. In order to do this, the singer’s delivery must have force and direction. Think of using a pickup truck to drag a trailer out of a muddy hole where it’s gotten mired. That truck needs to have some traction – the ability to pull that trailer along, with force, in the desired direction.

It wasn’t just good fortune that led Tony voters to nominate Forrest as Best Supporting Actor in a Musical, or the Ten Chimneys Foundation to designate him a 2014 Lunt Fontanne Fellow. In both cases, the voters recognized an artist at work: someone who has put his formidable technique at the service of the stories he is passionate about telling.