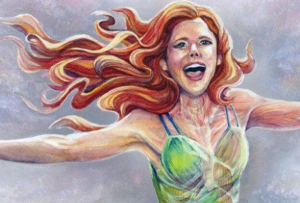 What?! You don’t have your copy of The Vocal Athlete yet? I mentioned to a couple of my colleagues that I had gotten a review copy of this new book by Wendy LaBorgne and Marci Rosenberg and suddenly I was barraged with requests to share it.

It seems as though the word has already begun to spread. With the publication of The Vocal Athlete, singers and voice teachers now have access to a remarkable, unprecedented collection of resources. The breadth and comprehensiveness of this two-volume set are remarkable, a testimony to the remarkably generous spirit of its two principal authors and their supporting cast of distinguished contributors. What makes this a truly landmark accomplishment, however, is the unifying point of view the authors have taken and the way it serves to anchor this ambitious undertaking.

The cover image offers the first clue to the book’s approach: a flame-haired woman in a green gown is depicted in the act of singing, her arms outstretched and her hair and gown wind-blown, creating an impression of dynamic energy. It’s arresting but slightly disconcerting, though, because the artist has drawn the figure in such a way that her skin appears translucent in places, with the muscles below the skin and even the larynx itself visible on one side of her body. The image dramatizes the fundamental approach of the book, which strives to present scientific information and insight while maintaining a consistent awareness that this information, once fully understood and integrated, is meant to serve the act of singing with passion and expressive force.

What this image doesn’t convey, however, is the core concept of the “vocal athlete.” Though this semi-transparent diva may be belting her face off, that gown looks more suited to a formal dinner-dance than to an athlete in training, or indeed, to the versatile and resourceful “hybrid singer” this book was created to serve. The authors have built their collection around the notion of elite athletic-style training performance as being the key to successful singing performance, and the cover could do a better job of representing their uniquely useful point of view for the reader.

The authors have coined the term “hybrid singer” to refer to someone who is equally comfortable singing classical, rock, country, pop or theater repertoire. The hybrid singer needs to be able to move, to dance, to be emotionally expressive, to communicate a text with clarity and understanding. In short, this is a book for the singing actor, and both its authors have substantial experience studying and working with musical theater performers.

There are easily more than a hundred musical theater programs now offering undergraduate degrees in the US, which means there are thousands of students training to be “hybrid singers,” and thousands more who have completed their studies and are now seeking to start or maintain careers in the field. So how many programs are there training teachers to train this new sort of singer? How many that equip teachers with the specific concepts, tools and techniques that will help their students negotiate the challenges of “CCM” (contemporary commercial music, a term and abbreviation that appear throughout the book)? Just two. That’s an incredible imbalance that the information in this book may help eventually to remedy.

Please don’t think for a minute that I’m suggesting teachers who haven’t trained in the grad programs at Penn State or Shenandoah are not equipped to train students for the musical stage. On the contrary, I know a vast number of committed pedagogues doing invaluable work in the field, many of them friends and colleagues. Their backgrounds, though diverse, usually include some sort of foundation training in classical technique, but over the years, they’ve learned to adapt their bel-canto foundation in response to the unique stylistic demands of the modern repertoire, often because they’re facing those challenges in their own performing careers, or because their students need to be able to sing in styles where old-school bel canto technique just doesn’t seem to do the trick. The phenomenon of the “hybrid singer” has led to the proliferation of a “hybrid teacher,” one whose pedagogy has been developed through a combination of trial-and-error, clinics, master-classes and demonstrations of various sorts from a range of presenters in a range of disciplines. Early responses suggest that this kind of teacher will find “The Vocal Athlete” to be an incredibly valuable resource, a compendium of some of the best and most current thinking in the field, complemented by a thoughtful review of the scientific literature. (Already, one reviewer has described this book as “the go-to Vocal Pedagogy textbook for years to come.”)

But what, you ask, am I likely to find inside this collection? Let me break it down for you. First of all, you should know that there are two volumes, the second of which is described as a “workbook,” which comes spiral-bound with an enclosed audio CD. The first volume is divided roughly into three parts, the first of which provides an overview of the mechanics of vocal production from an anatomical point of view, covering topics like posture, breathing and neurology along with vocal anatomy. Great singing isn’t just about what happens in the vocal folds; it’s the product of an exquisitely coordinated effort of body, mind and spirit, and this book goes a long way toward promoting a holistic view of singing.

In the second part, the authors survey the range of ways that things can go wrong with the voice. One study of incoming musical theater freshmen found that the majority of these students exhibited some sort of “phonotrauma,” some way in which their vocal production deviated from the ideal, and this part of the book is an eye-opening survey of the pathologies they present, including reflux, vocal fatigue and the consequences of intubation during anesthesia. If you’re a singer prone to anxiety and hypochondria, there’s plenty here to make you wonder if there isn’t something wrong with your voice, but have no fear: the real emphasis of this book is wellness, not sickness, and the next section holds the key to a healthy voice.

The third part of the book examines a range of topics in vocal pedagogy, starting with a history of classical vocal training before diving into the subject of “belting.” That topic that may have been controversial long ago, but nowadays wringing your hands about the dangers of belting is SO twentieth century; a combination of solid science and shrewd observation of current best practices will drive a stake through the heart of those worries. I found the chapter on “motor learning principles” to be especially provocative, since it laid out a logical and clear-cut set of principles from the world of exercise physiology that can be applied to any sort of training. A practice regimen built according to these principles can serve not only the development of good singing but also good singing-acting, that is, the effective coordination of the singing voice with the face, eyes, body and other “organs of expression.” I can’t wait to explore these concepts further in my own studio practice.

The final chapter is the work of guest author Matthew Edwards from Shenandoah University, whose experience working in the recording studio has given him invaluable insight into what every singer and singing teacher needs to know about microphones and signal processing. Matt’s a pioneer who’s had great success introducing audio technology in his singing studio, as I learned during an especially compelling demonstration he gave a few years ago at a conference of the Musical Theater Educators Alliance. This final chapter adds tremendous value to an already worthy compendium of singing wisdom.

But as if that weren’t enough, the authors have created a companion workbook to showcase a wide range of exercises and training techniques. They’ve persuaded leading practitioners in the field to contribute some of their most interesting ideas, documenting their work in text, photos and audio and organizing their collection into useful categories. Some of these exercises have self-explanatory clinical names, but there’s plenty of wacky and whimsical nomenclature to be found here as well. Want to try the “Meow Mix” or the “Hoot-n-Hollar?” Curious about “Clari-bees,” “honking” and “mirening?” This workbook and CD provide both teachers and students with the opportunity to explore some of the best practices of the world’s top pedagogues.

What’s In A Metaphor? 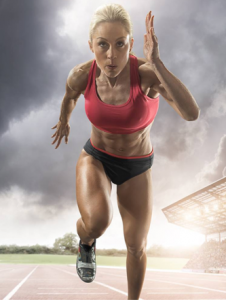 To conclude, let me come back to the notion of the “vocal athlete,” a metaphor which I find incredibly useful. Antonin Artaud has referred to the actor as “an athlete of the emotions” (or “of the heart,” depending on which translation you consult), and the concept of athleticism as it pertains to the performing artist is not a novel one. The metaphor of the athlete is meant to convey an essential notion of elite performance achieved through deliberate, persistent practice. Concepts of strength, range, flexibility, agility and coordination are as relevant to the singer or actor as they are to the quarterback or the basketball center, and for these reasons, I’m totally down with the concept of the “vocal athlete.”

However, there’s some unwanted psychological baggage that comes with this metaphor. For one thing, there’s that business of “no pain, no gain.” One of the principles of building strength or skill is that one has to push beyond one’s comfort zone to a point of “overload” in order to experience progress, and in the case of the singer, overloading the delicate mechanisms of vocal production can lead to damage. Pain is a useful warning and the vocal athlete ignores this warning at his or her peril.

Beyond that, in the athletic world, elite performance is most commonly associated with extremes of range and power. Singers who embrace the metaphor of athleticism may be tempted to believe that they need sing as loud and as high as possible in order to compete successfully in the employment marketplace. While it’s true that there are moments where one needs to be able to bring that kind of extreme force, I want to suggest that there are other aspects of elite athletic performance, most notably flexibility, agility and coordination, that deserve greater emphasis in the training of the vocal athlete. I know the intoxicating rush you get from belting your face off like the chick on the cover of “The Vocal Athlete” – anyone for “screlting?” – but the savvy singer (and, yes, the SAVI singer is a savvy singer) understands that a little of that goes a long way.