What is the essential work of the singing actor-in-training? 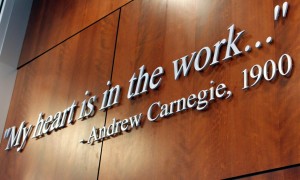 My alma mater, Carnegie Mellon University, uses these words of its founder, entrepreneur and philanthropist Andrew Carnegie, as its motto, and what better day than Labor Day to recognize the importance of having one’s “heart in the work?”

Today is a U.S. holiday established to pay tribute to the American worker and recognize the value of their contributions, individually and collectively, to our society and its economy. I’m sure the founders of Labor Day never intended to include artists and theater-makers in their definition of “laborers,” but our work certainly makes a contribution to both society and the economy.

In our society, we consider “work” and “play” to be opposites. “Work” is supposed to be hard, a form of drudgery, and if it isn’t drudgery – if it isn’t “hard” – then it isn’t work. Meanwhile, in the theater, we make “plays,” and though we know that making them is hard work, the element of play involved makes the “straight” world suspicious of our efforts.

But here’s the thing that I’ve learned over the years: When your heart is in the work, you are able to undertake that work in a spirit of joy. You become absorbed in the task, the work seems effortless, and time passes without your even being aware of it. “Work” and “play” may seem like opposites, but it’s crucial that the artist understand how these two concepts are linked, like day and night or yin and yang: you can’t have one without the other. “In play we trust,” wrote pioneering musical theater educator H. Wesley Balk, “if we’re serious, we must.”

Labor Day falls at the beginning of the American academic year, and here in Philadelphia, the work of the fall semester has begun at the University of the Arts. Students are shedding the torpor of the summer months and the machinery of academia – lessons, schedules, syllabi, homework – is shifting into a higher gear as the fall term begins. As a lifelong academic, the back-to-school vibe of late August and early September has always been pleasing and familiar for me.

As I kick off my fall classes, I want to write in the most basic terms about learning to become a better singer or singing actor. The nature of that task is fundamentally two-fold; that is, pursuing the goal of improving your communication skills while singing involves two sorts of work, different and distinct from one another though inevitably linked. I call them

Work on the singer

Work on the song. 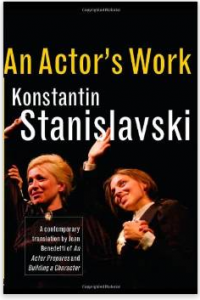 The visionary pedagogue Konstantin Stanislavski saw this fundamental duality at work in every aspect of actor training he taught in Russia and on tour throughout the world. His first book, known to generations of readers by its imperfectly-translated title “An Actor Prepares,” was actually titled “An Actor’s Work on Himself,” while its sequel was conceived by the author as a volume about “An Actor’s Work on the Role.” Work on the self, work on the role: In Stanislavski’s view, you have to have them both, two different sorts of labor, if you intend to succeed.

Work on the self (“on the singer,” as I put it) is a type of training, not unlike what an athlete will go through. That work must be done diligently, daily, putting in hour after hour in the practice room to sharpen your skills as a singer and communicator. Attention must be paid to the excellence of the vocal sound being produced, but special emphasis must be placed on cultivating the ability to “create behavior that communicates the dramatic event” is crucial and central.

Work on the song (or “on the role,” in Stanislavski’s formulation) is equally demanding, and begins with a thoughtful examination of the material at hand, looking for evidence of the opportunities for artistic choice-making that inhere in this specific repertoire. In preparing the work for performance, the singer will apply the technique skills that have been explored and cultivated during his “work on the self” to craft expressive choices and coordinate those choices with the musical event of the song.

You’ll find more here about the nature of that work in the pages entitled “Train to Gain” and “Making The Most of Practice Time,” and I encourage you to consider this material thoughtfully if you haven’t done so already. There’s plenty there to guide your efforts and inspire your spirit as you undertake the work of the months ahead.

“There is work to be done, to be done,” according to the Gershwins’ song “Strike Up The Band,” and that’s true regardless of whether you’re a student, a working pro, a teacher or a passionate amateur. Work on yourself, work on your songs, but whatever you do, do the work! Today, on Labor Day, I remind you that, if you undertake that work purposefully, playfully, passionately and with plenty of heart, your efforts will be rewarded. Our work is indeed a labor of love, and I’m immensely grateful to have been able to make it my chief occupation for nearly forty years!