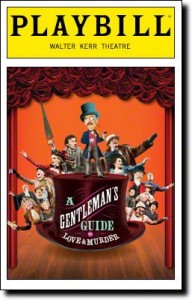 I’m feeling particularly inspired after listening to the soundtrack of this year’s Tony Award winner for Best Musical, A Gentleman’s Guide to Love and Murder. From the first seconds of the recording, my theatrical Spidey-senses were tingling: this year’s Best Musical features honest-to-god show tunes! No emo indie rock, no recycled jukebox grooves, but brilliantly original theater music with dense, intricately rhymed lyrics, distinctly articulated rhythms, and a bright, colorful orchestral palette. (And did I mention the legit singing?) A big shout out to composer-lyricist Steven Lutvak and his collaborator, librettist and co-lyricist Robert L. Freedman, with mad props also to venerable orchestrator Jonathan Tunick, for their accomplishments.

Of course, almost any kind of music can be “theater music.” This year’s Tony for best score and best orchestrations went to Jason Robert Brown, whose score for The Bridges of Madison County is equally distinguished and equally theatrical, though it’s as different from Gentleman’s Guide as chalk from cheese. The other nominees included Beautiful (Carole King’s pop hits, theatricalized with bio-jukebox arrangements), After Midnight (jazz standards fresh from the Harlem scene) and Aladdin (Disney middlebrow maestro Alan Menken, in collaboration with Howard Ashman, Chad Beguelin and Sir Tim Rice). There could scarcely be a more eclectic collection of musical styles than these, but they all have something in common: the songs are dramatic events, delineating the characters and supporting the story.

Yes, theater music is marvelously diverse, and the shows that excite me these days reflect that phenomenon: at one end of the spectrum, Natasha, Pierre and the Great Comet of 1818, Fun Home and Gabriel Kahane’s The Ambassador, slated for a stage production at BAM this fall; at the other, Kiss Me Kate, which I directed this spring, and The Student Prince, which I’ve been excavating this summer with the idea of developing a contemporary college musical around it.

It makes things hard for the singing actor. Most definitely, you need big ears as well as an open mind; you never know what the next potential gig will call for. Over the years, I’ve preached the gospel of versatility to my students: explore as many styles as you can, and work on the ones that you find an affinity for, practicing until your expression in that style becomes absolutely authentic. Load up your iPod and your Rdio playlist with all sorts of music, theatrical and non-, and listen up!

The choice of Gentleman’s Guide as Best Musical offers some reassurance that the type of theater music I’ve always loved hasn’t gone entirely out of favor. And the SAVI Singing Actor will recognize that nearly any song can be an opportunity to tell a story, and has the tools to communicate a dramatic event by creating expressive behavior while singing.

Full disclosure: As composer and lyricist for more than a dozen musicals, the SAVI Savant gets pretty opinionated about show tunes, but he considers that an asset, not a liability. Got your own opinions? Leave a comment below!